The rebuild of a classical Baltic Trader

After 85 years of service and one big refit in the early 80s, Hawila’s structure needs to get back in proper shape to extend her life by at least another 80 years.

New keelson and side keelsons

The keelson was mounted in 1935, cut & extended in 1938 and patched in the early 80s. This old multi-pieced assembly has been replaced by a stronger and larger assembly of only 4 pieces: the new 11 m keelson scarfed in the forward part to reach the apron at 18 m, and two 11 m long side keelsons

During dismantling, treenails clearly showed better longevity than steel fastenings, where rust promoted rot in the oak. Steamed planks were therefore quickly screwed in position, before finally mounting them with treenails.

The forward 3/4 of the ship are now fully refurbished from keel to deck, including the stanchions for the bulwark.

The bottom futtocks along the hull under the new keelson have been checked and replaced where needed, with additions of 15 floor timbers mainly under the main and mizzen masts and at the locations for the new bulkheads. All other upper futtocks were systematically replaced. 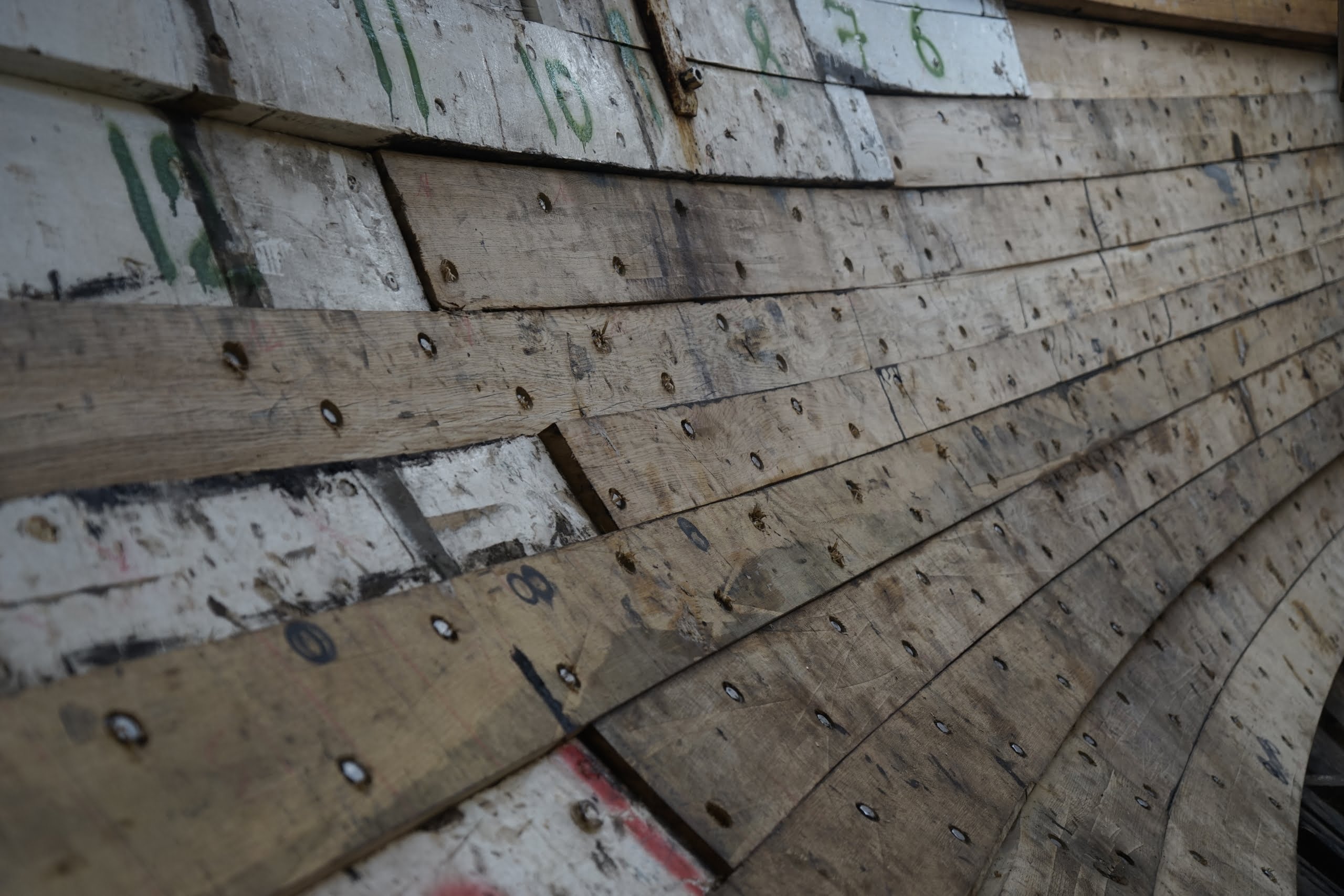 Accessing the bow frames and stanchions made it necessary to remove the ceiling and beam shelves. This made a good opportunity to replace all beam shelves with with doubled pieces of 12 m lengths. We also increased the thickness of the ceiling and the bilge stringers so they now go further aft to support the stern arch. To reinforce the forward part of the vessel and the bowsprit assembly, deck beams were reinforced increasing their dimensions and numbers. The old Samson post was replaced by a doubled piece of nearly twice its original thickness to withstand the enormous forces brought on by the foresails. The renewal of the deck conveys an opportunity to change the placement of stairwells, to renovate our existing skylights, with the addition of several new deck elements and a reinforced quarter deck structure.

Hawila was built as a cargo ship, and later converted into a school ship.

We now combine these two previous purposes in a unique new design, to enable her to cross the Atlantic, a first in her lifetime.

Each of the two cargo hold is convertible and can carry either 8 trainees or 30 to 40 tons of cargo. This demands a thorough alteration of the ship’s layout, to comply with regulations and accomplish Hawila’s new functions.

The ship is now partitioned by four watertight and fire-retardant bulkheads which drastically improve safety onboard, and keep the fully loaded ship afloat with one compartment flooded.

Watertightness between compartments is ensured by wooden bulkheads, designed to withstand both fire and water.

The choice of wood as material is due to practical reasons: steel bulkheads can’t cope well with humidity and rolling deformations typical for a wooden hull.

The bulkheads also act as buttresses for the hull, correcting previous deformations of galley and deck back to their original shape. 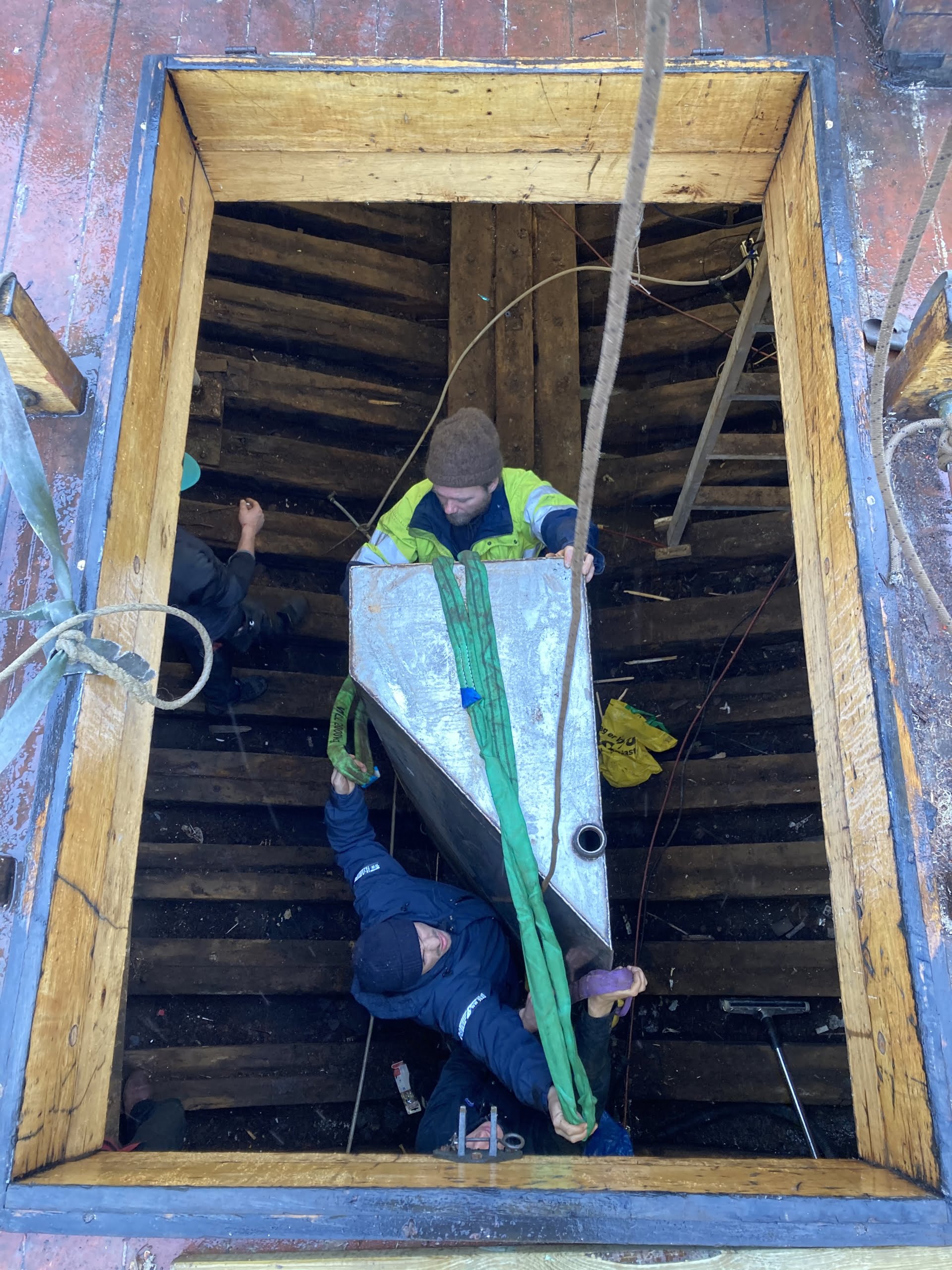 In 1807, Britain, doubting the neutrality of Denmark during the Napoleonic wars and fearing Napoleon would take control of the Baltic Sea, attacked Denmark. After two weeks of heavy bombardments, for the first time in history with rockets launched from ships, Denmark had to capitulate.

One condition for this capitulation was that Denmark had to hand over its entire fleet. Shipyards were destroyed, and shipbuilding tools were confiscated by the British, to forever cripple Denmark as a maritime force.

Following this disaster, in 1810 King Frederik VI ordered thousands of oaks to be planted for building new ships – 200 years later.

We managed to buy 15 of the last of these historic ship oaks from Naturstyrelsen, the Danish agency administering the State forests of Denmark. These oaks come from Gribskov, the 4th largest forest of Denmark, now a nature reserve.

Naturstyrelsen was founded in 2011 as an agency for the sustainable management of state forests under the Ministry of Environment. Only very few of the oaks planted for shipbuilding in 1810 were ever used for ships. Most of them are sold to the furniture industry and are being shipped to China. Worse even, they end their proud lives as firewood.

We feel privileged to be able to honour the initial purpose of these trees and use them on Hawila. We carefully selected the trees we needed for each purpose of the rebuild, already in the forest, together with Naturstyrelsen’s forester. Our trees were removed to give place for wild growth, since the entire forest has been designated as a nature reserve. This is part of Denmark’s plan to double the percentage of woodland to around 30% of Denmark’s area and to increase biodiversity. No trees will ever be felled again in this part of the Gribskov (Vulture Forest)

160 tons is roughly the amount of CO2 stored in one hectare of Danish state-managed oak forest. In these forests, mature trees are extracted and replaced by young trees at a rate of 5,8 m3 per hectare per year. In theory, the wood production of one hectare therefore exceeds the average yearly needs for maintaining a vessel like Hawila forever.