The keelson is of primary importance in the structure of a wooden vessel. It can be seen as the mirror of the keel, inside the ship, going from the stem to the stern with frames and floor timber sandwiched in between. On Hawila, the central keelson is also strengthened by sister keelsons on both sides, bolted through the frames and through the keelson, making a coherent structural unit.

We replaced 2 of the 3 central oak pieces making Hawila’s keelson -joint between them with a 2,5m scarf- in addition to the two sister keelsons. The original Keelson was about 25x20cm, we increased the size to 50x25cm over a length of 18m. The aft keelson was very well preserved and left in place. We integrated the keelson in the bow, sandwiching it between two deadwoods at the apron.

Before starting to work on the new keelson, we had to dismantle the old keelson and sister keelsons, which were firmly bolted in the keel and the frames. In some places the wood was well rotted, in other places, it seemed to have started a fossilization process making it unbelievably hard to cut and drill. After removing the whole keelson, we did a comprehensive bolt mapping to track each bolt hole and plan the fastening of the new keelson. In the 1980’s a second keel was bolted underneath Hawila’s original keel, trapping the old keel bolts which we could not remove and preventing us from doing much work on the old keel. As such, we chose to keep as it was and to accommodate the keel deformation on the new keelson.

To take the measurements, the center line of the ship was established, we then made a level to work and map the future keelson shape. Multiple measurements were taken in the ship to guide the future fairing of each frame and the cutting of the keelson. We used a string which represents the top of the new keelson and took measurements to establish the way of cutting the wood. The shape of the new keelson and sister keelsons were then traced on the new pieces of 200 years old oak. Tracing is a crucial part of the process and the features had been checked with particular attention, because the dry fitting process has to be as efficient as possible. Only after accurate checks of each measurement can the timber be cut, first with power tools, then with more precise and tools. All knots and damaged parts were then plugged with dutchman.

We brought the circa 1 ton central keelson with a crane using a hole made in the frames on port bow. The whole process had to be well thought in advance as with such a heavy piece nothing can be left to hazard. With serious preparation and great teamwork, the lifting went smoothly. The smaller forward keelson and the two sister keelsons were lifted only with straps and chains block.

Once inside, it took less than an hour of local adjustment to dry fit the keelson which fitted perfectly, not a millimeter of error, very impressive on such a large piece with difficult assemblies!

Once dry fitted, they are ready to be fastened ! 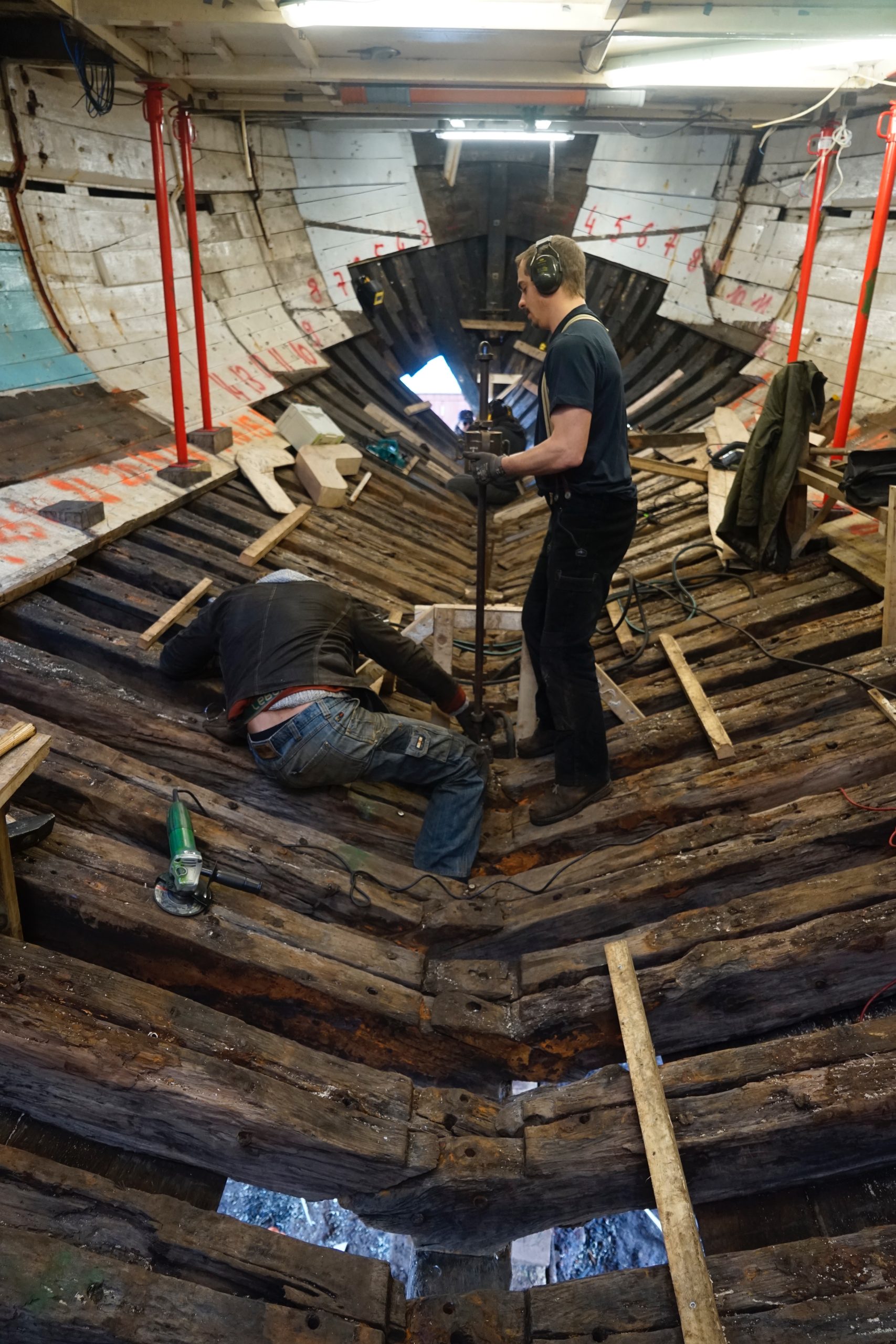 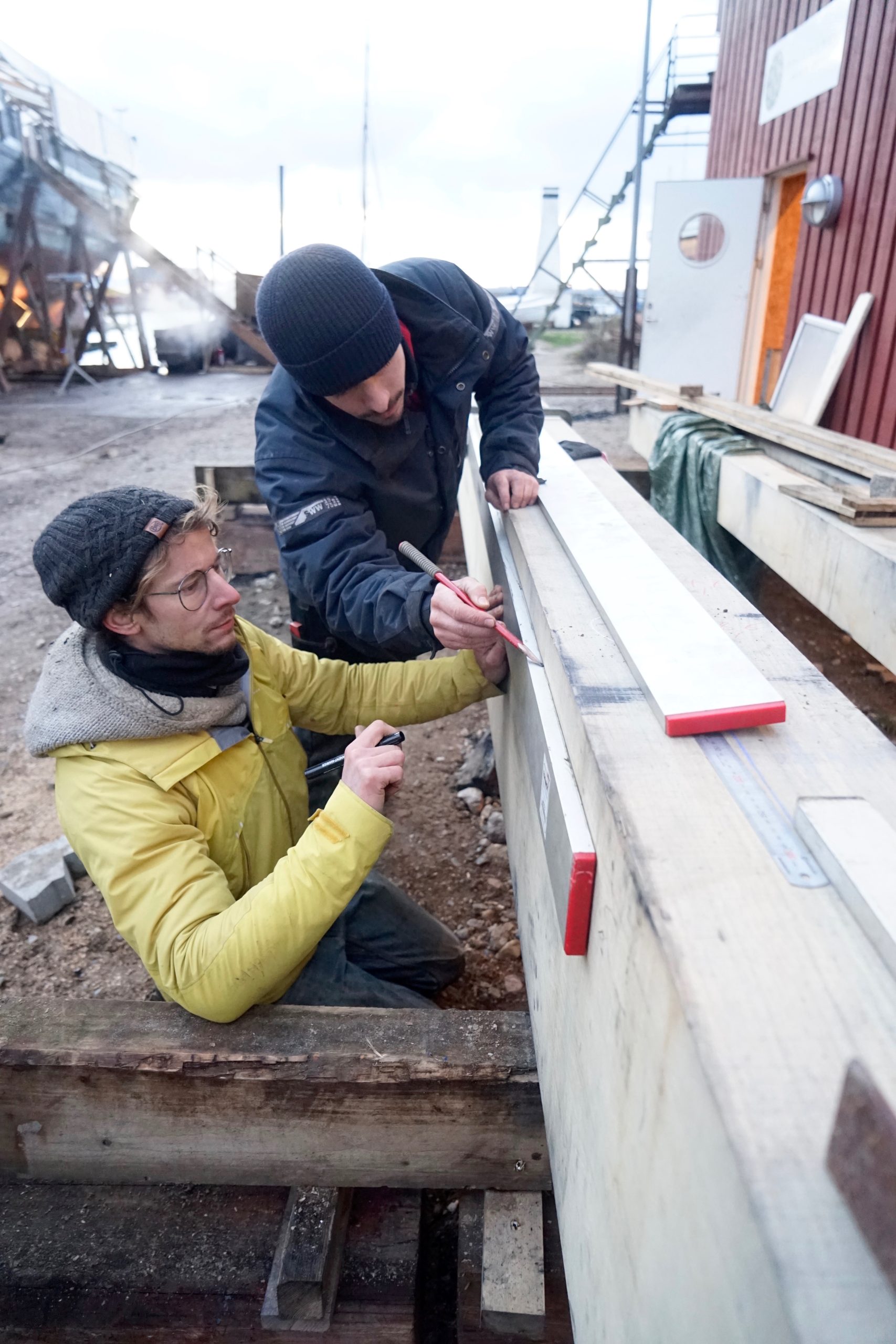 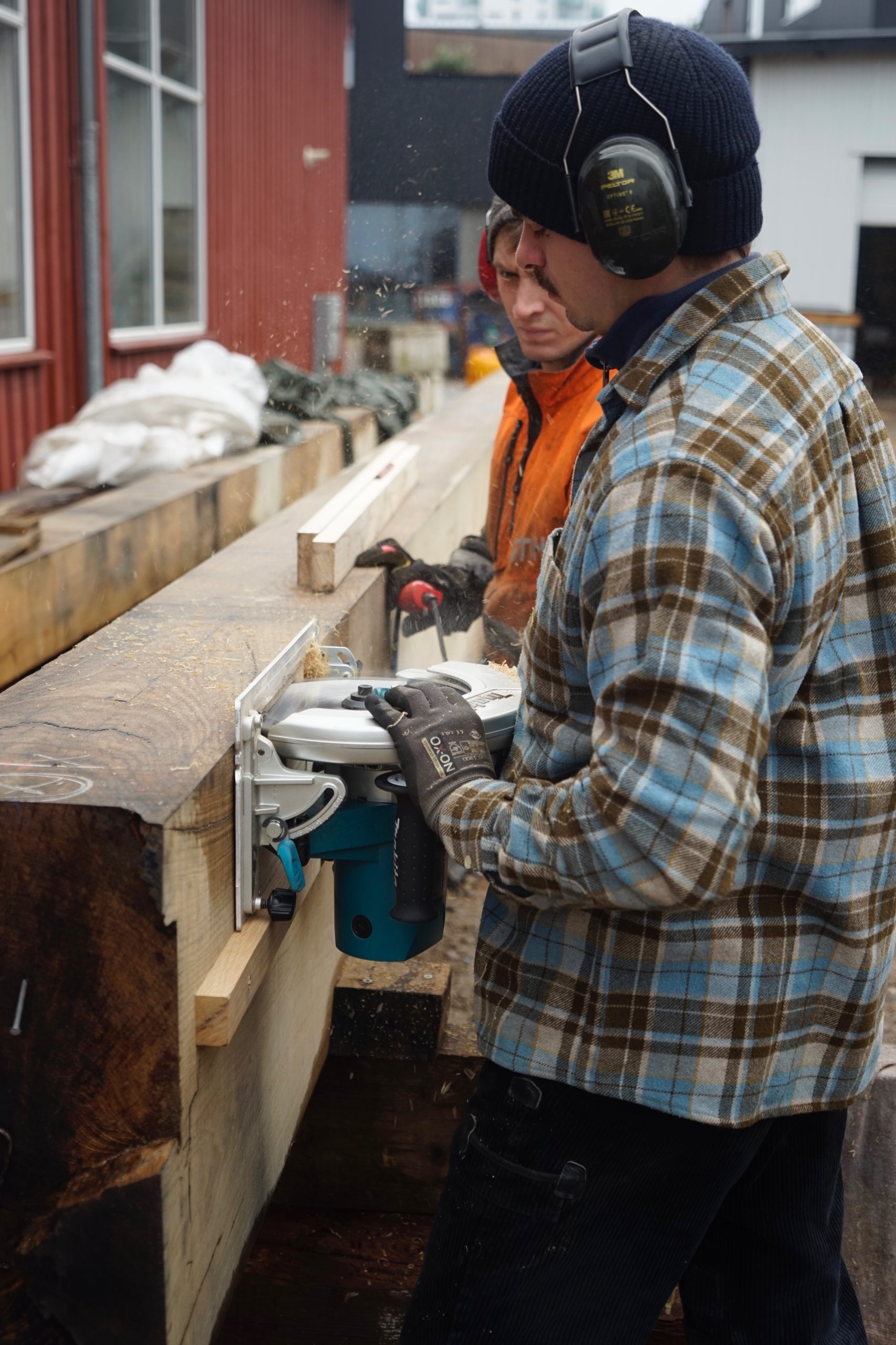 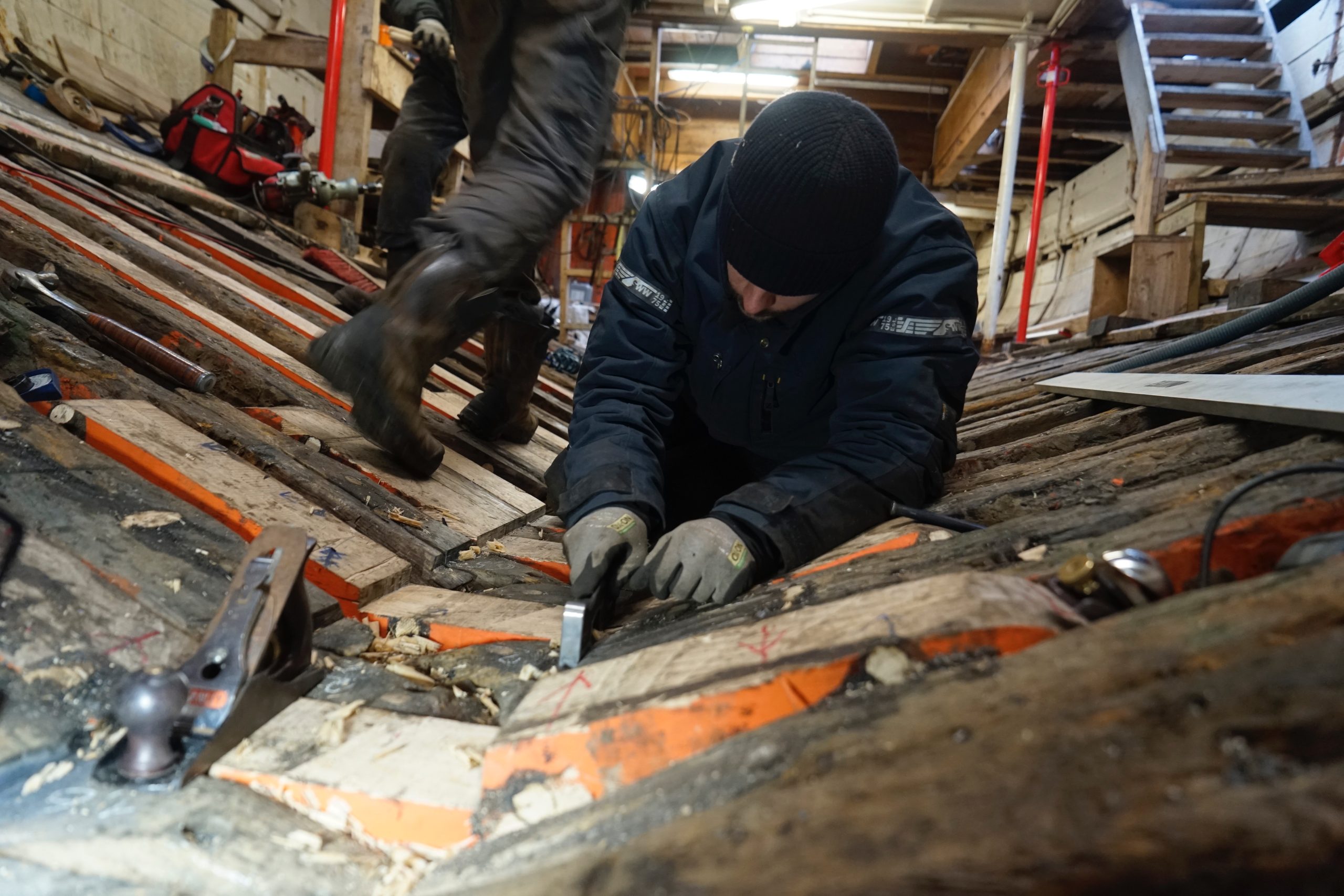 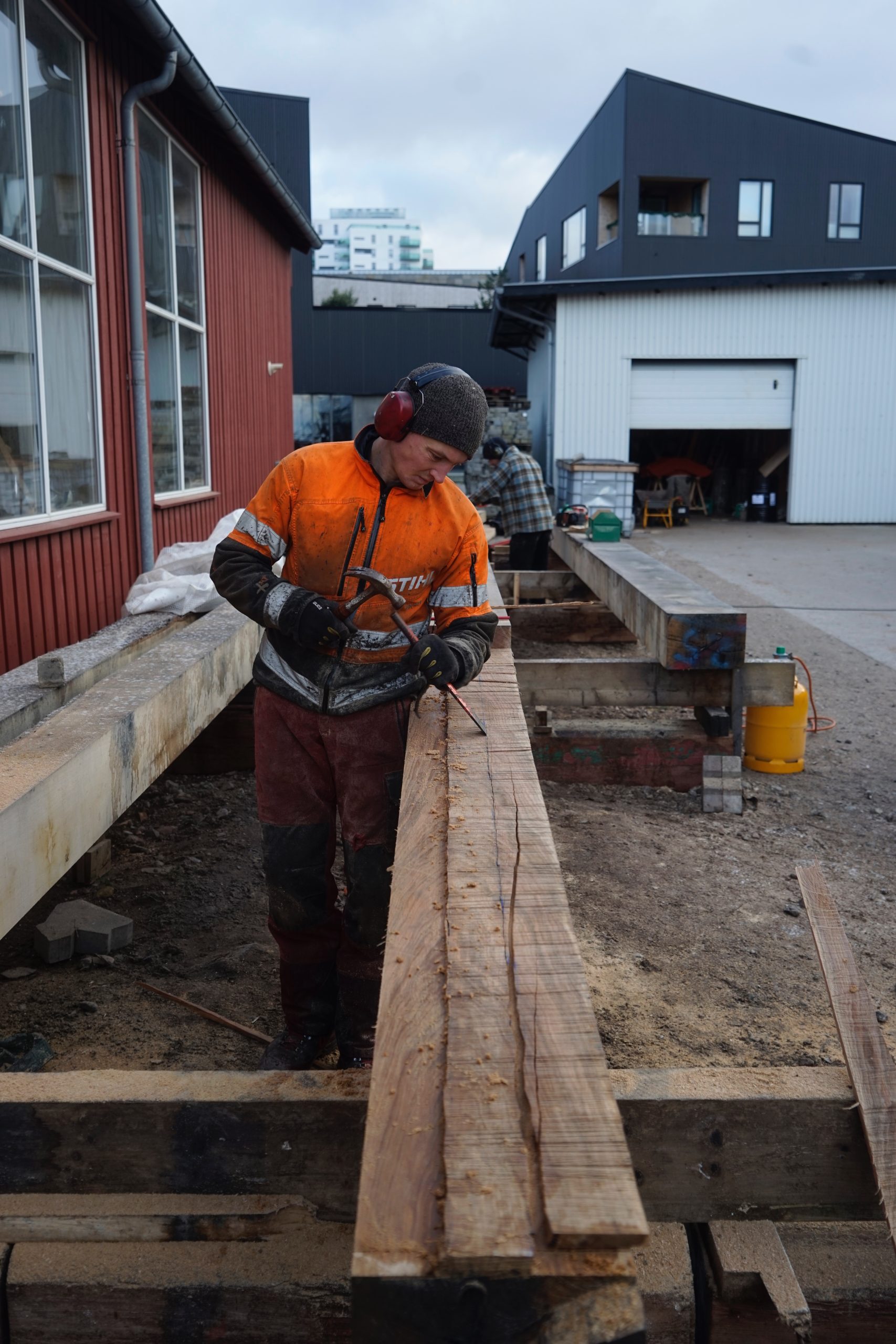 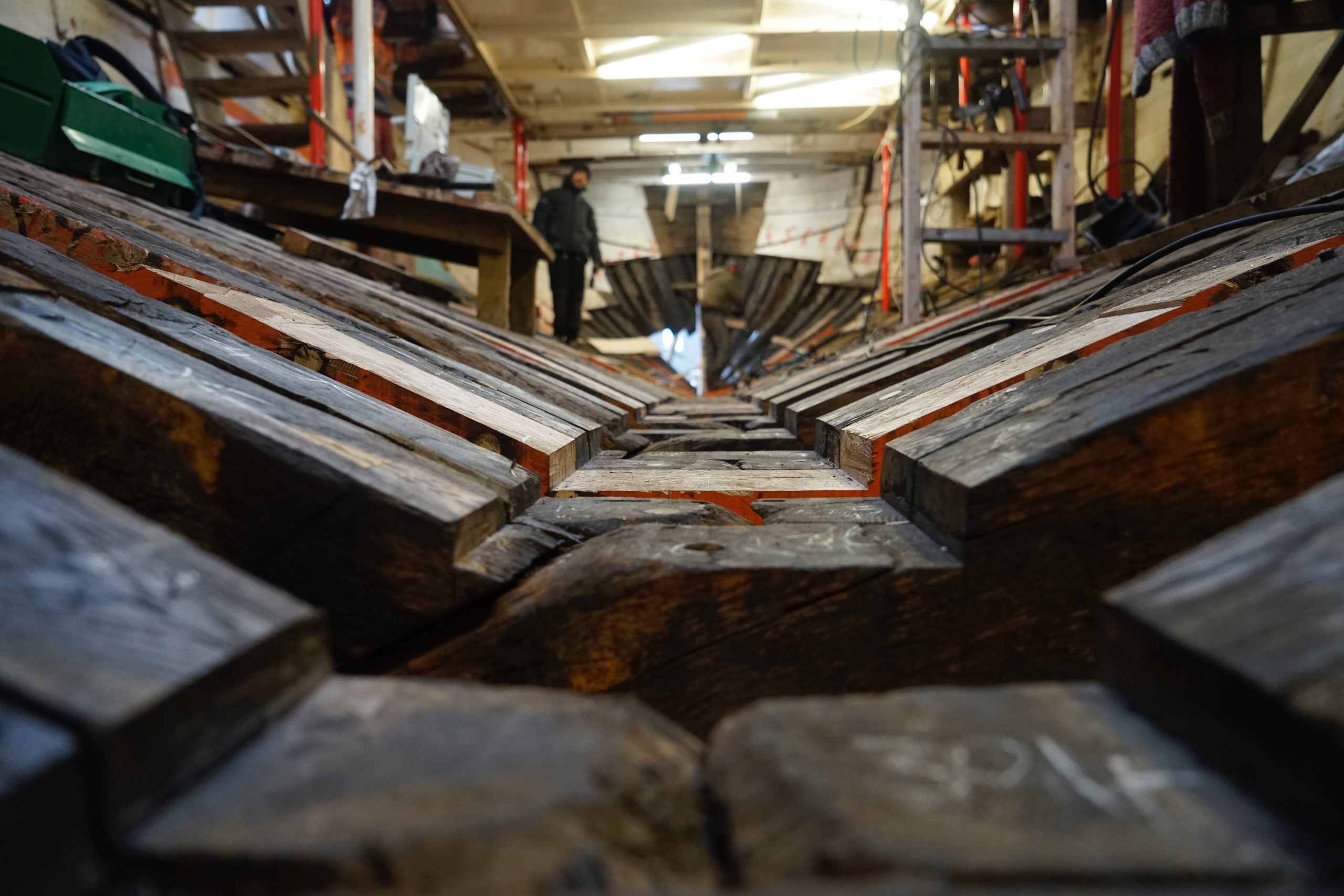 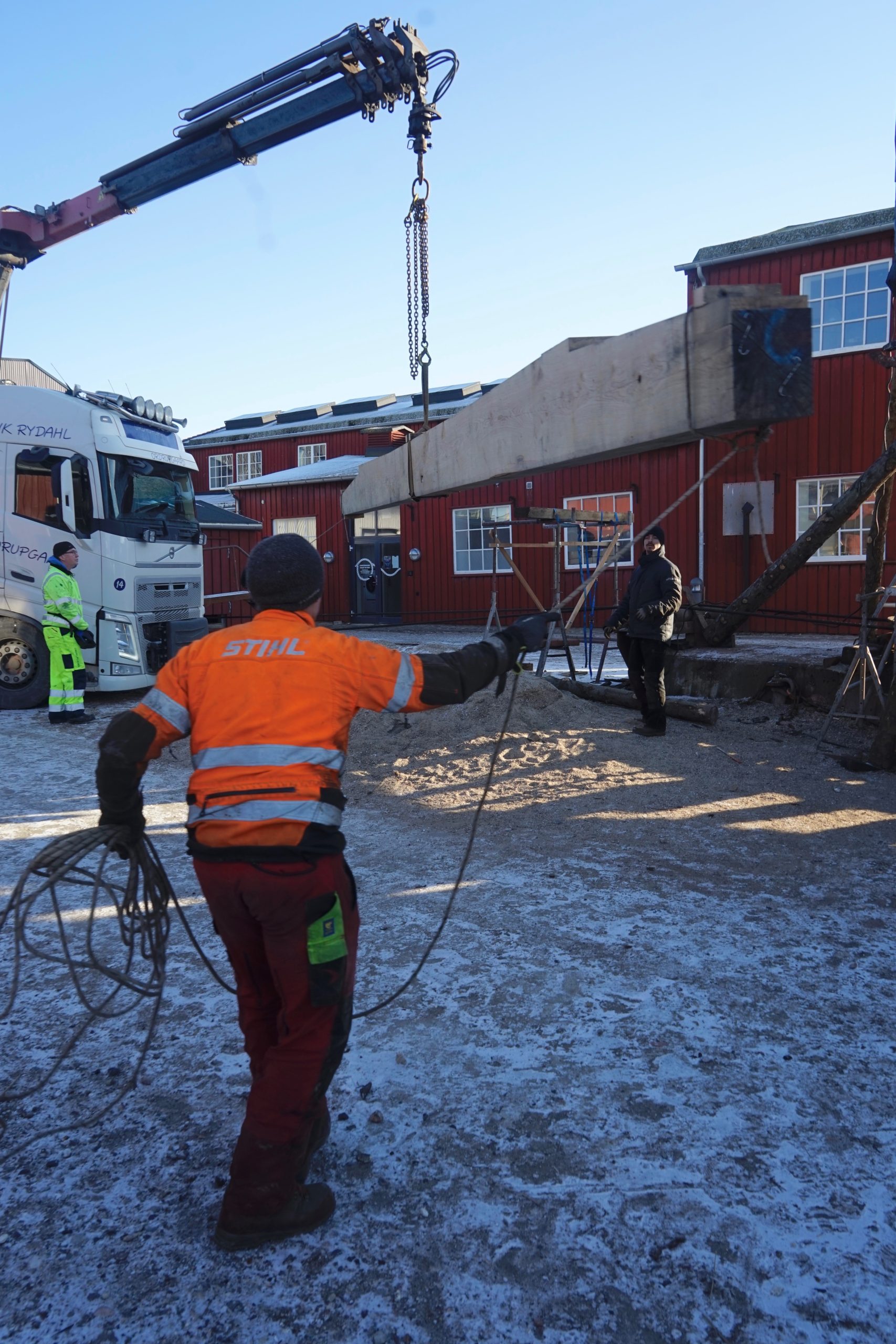 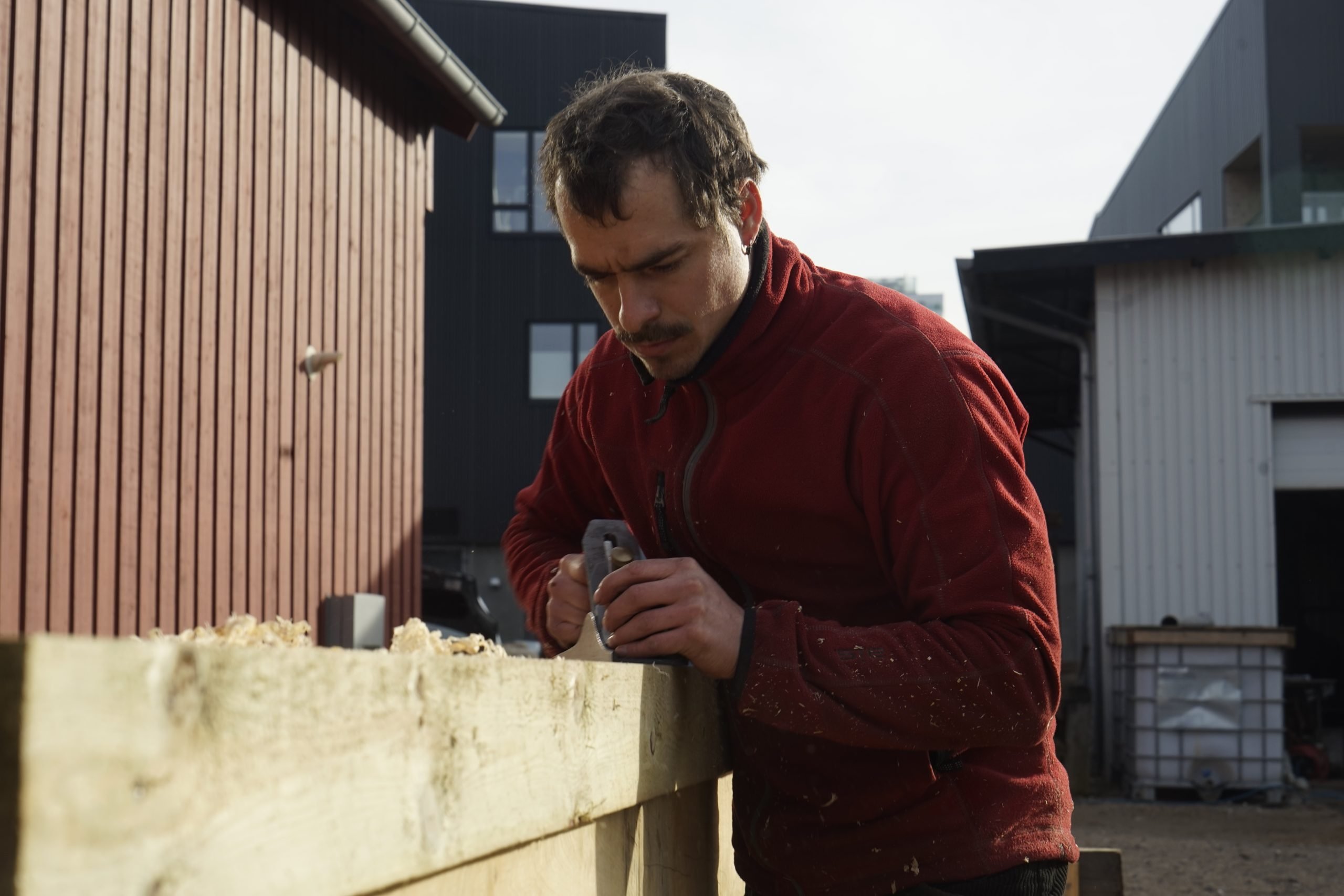 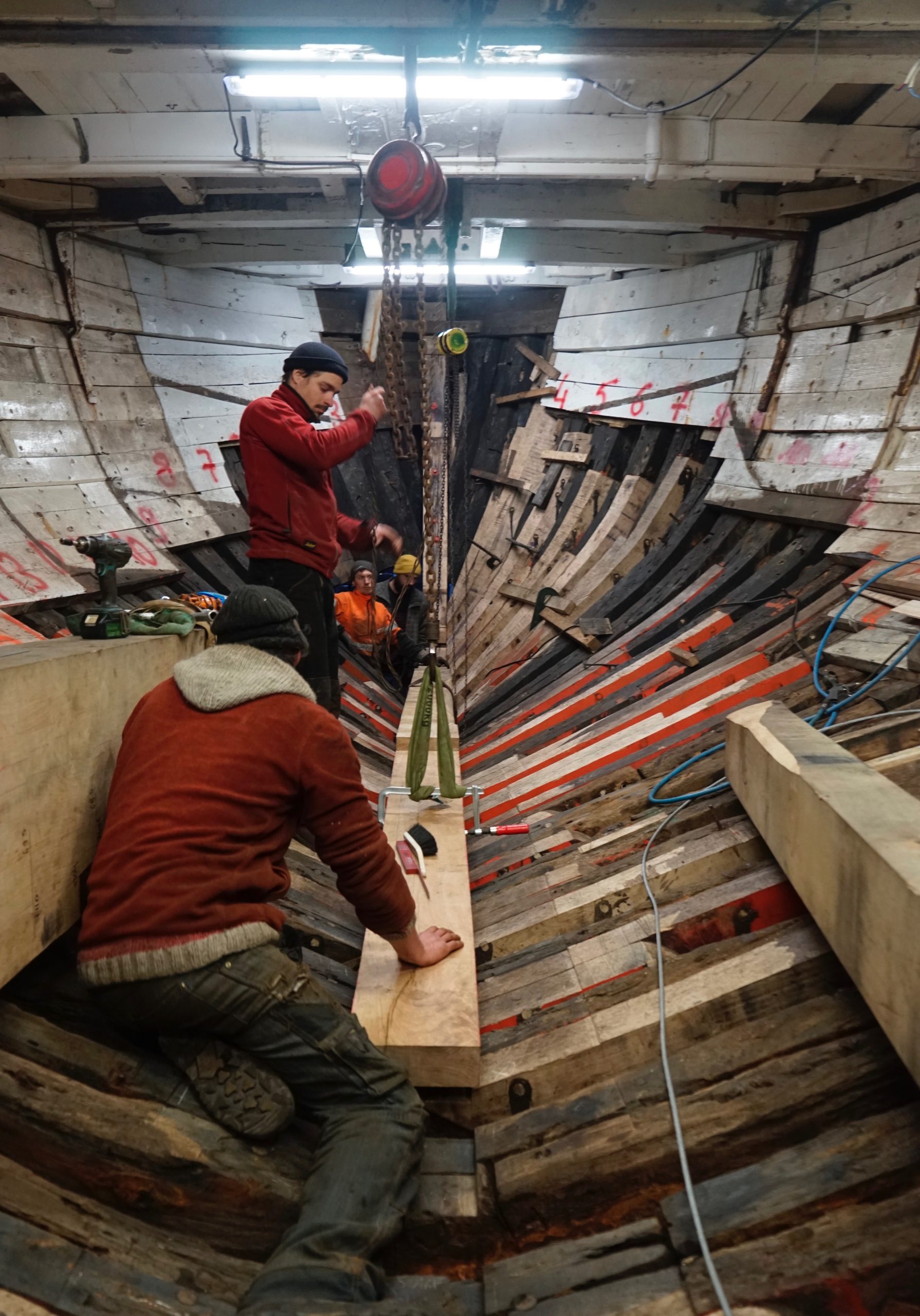 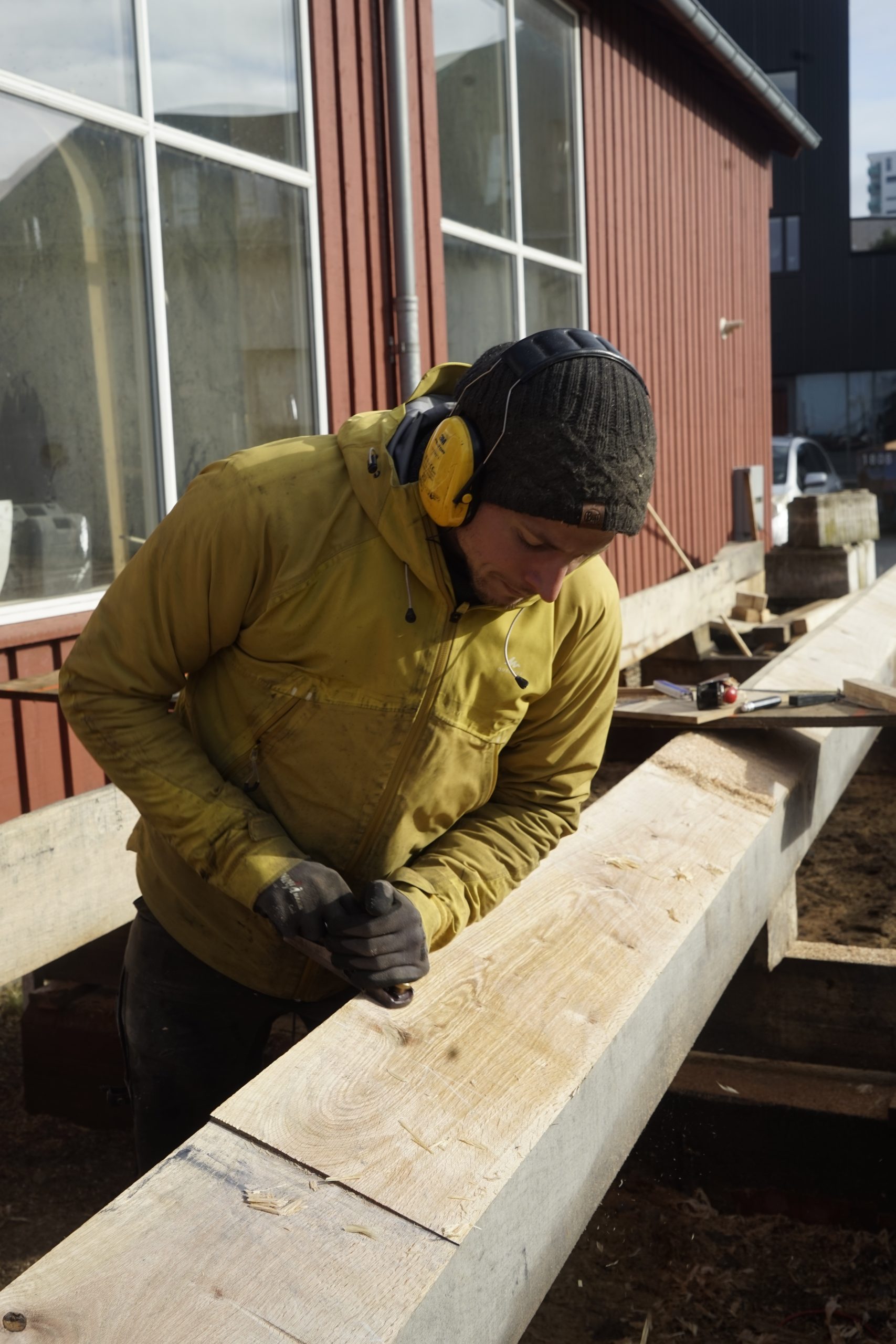 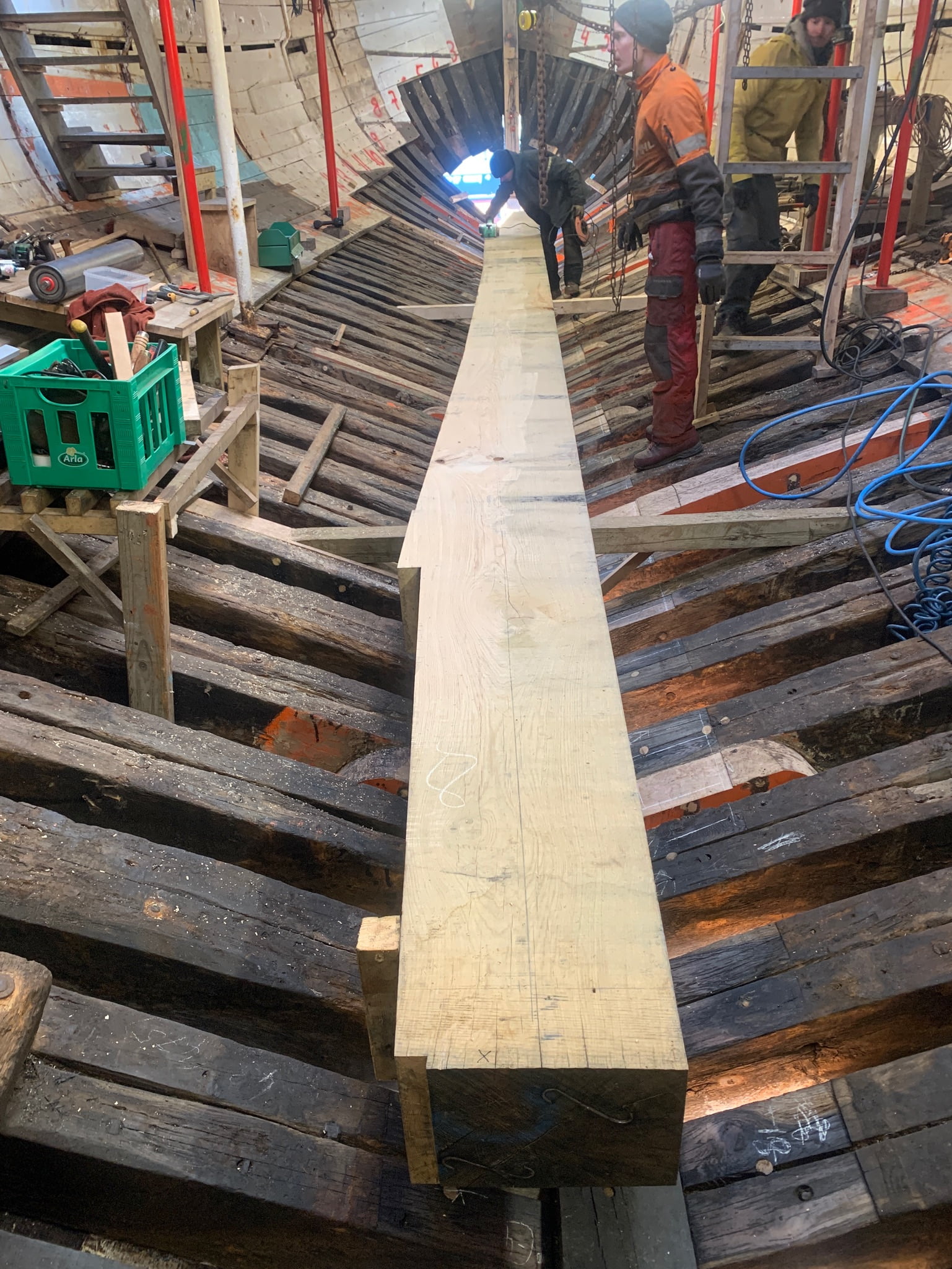 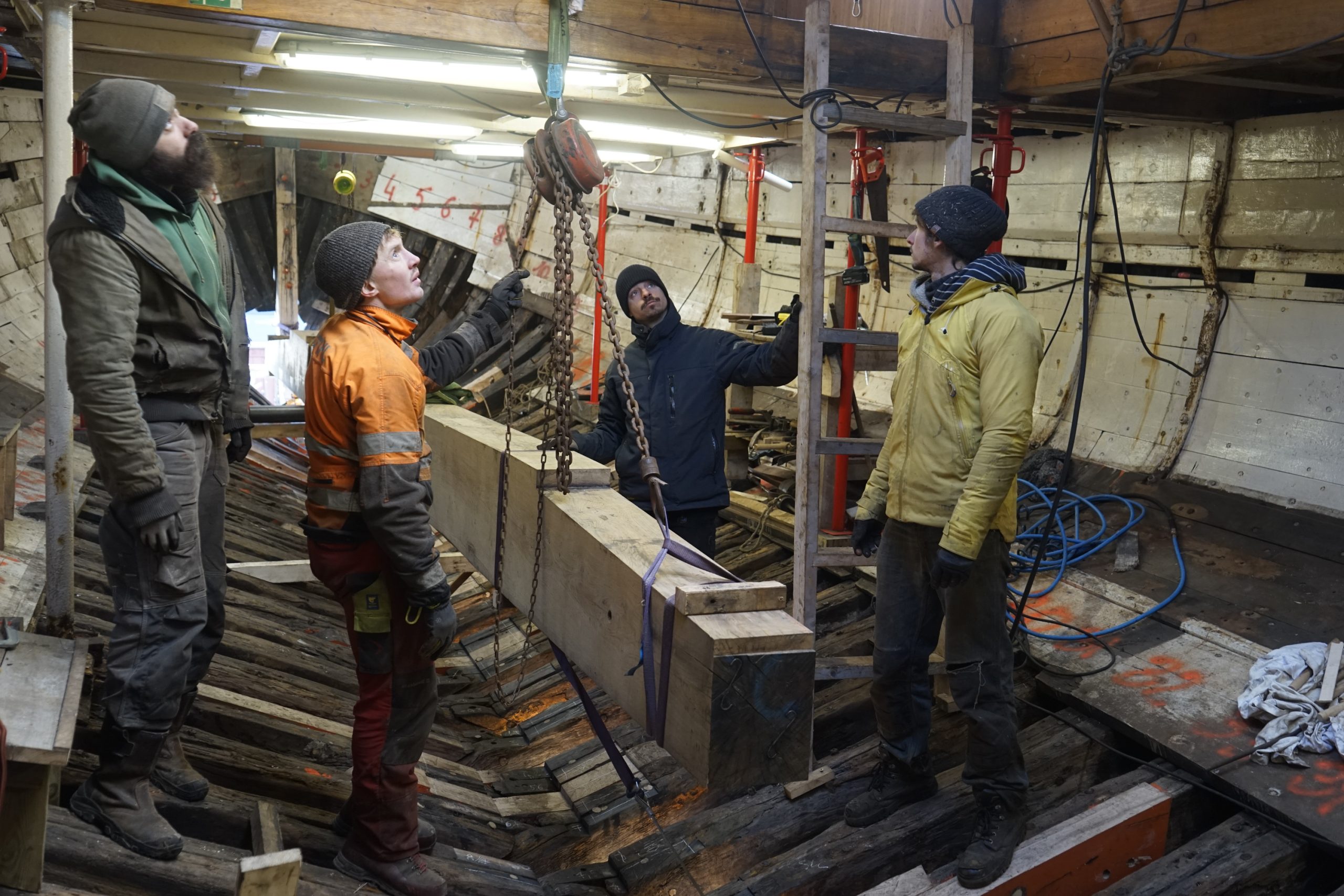